As the second half of the 117th Congress kicks off, join AmericanHort’s advocacy team and distinguished guests to discuss the outlook on key industry issues to include the agricultural workforce, H-2B, USDA programs, research funding, and Farm Bill, as well as priorities in Congress.

Lynn Jacquez’ professional background spans private law practice, government relations, and service in the Federal government. In her work for its Subcommittee on Immigration, Refugees, and International Law, she had primary responsibility for the drafting and processing of the Immigration Reform and Control Act of 1986 (IRCA) and refugee reauthorization legislation.

After her tenure on the Committee, Ms. Jacquez entered private practice with Heron, Burchette, Ruckert & Rothwell, and later with McAuliffe, Kelly & Raffaelli. In 1992, she helped form the government relations firm which became CJ Strategies in 2006 and in 2011 established the law firm of CJ Lake LLC where she is now managing partner and Principal.

Witte previously worked for the House Agriculture Committee and Cornerstone Government Affairs. He holds a master’s degree in economics from George Mason University and bachelor’s degree in agriculture economics and agriculture business from New Mexico State University. Witte grew up in New Mexico where he showed livestock and participated in farm management judging as a member of 4-H and Future Farmers of America (FFA).

John-Mark Kolb will join us to discuss her Dignity Act, a broad new immigration reform bill that includes significant and beneficial H-2A, H-2B, and earned legalization provisions. Rep. Salazar announced her goals for this legislation at the Impact Washington Summit in September.

Sean Babington will also be joining to discuss climate initiatives at USDA. Babington previously worked for the Senate Agriculture Committee where he handled committee business pertaining to forestry, pesticides, and climate change.

AmericanHort unites us all—growers, retailers, breeders, suppliers, distributors, designers, landscapers, educators, researchers, and manufacturers—into a single, robust community, one in which we teach and learn from one another, and collectively rise to a higher level.
Build your knowledge and business networks by attending one of the many horticulture events AmericanHort hosts each year. The road to better performance starts at the AmericanHort Plug & Cutting Conference. As the premier event for young plant producers and growers from across the country, this conference is the place to learn the newest and best strategies, technologies, and techniques in the world of plugs and cuttings. Join Us For Grower-Focused EducationJoin expert speakers to dive deep on topics like best ma... Read More 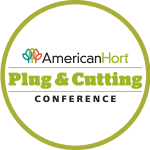 Cultivate is the national industry event hosted by AmericanHort every July in Columbus, Ohio. Cultivate owns the niche for gathering the entire industry supply chain in one place for four days of professional development and robust business opportunities with its 650+ exhibitor trade show, 100+ educational sessions and plentiful networking opportunities.

Attendees of the AmericanHort DIG Conference experienced in-depth education on Disease, Insect, and Growth regulator management and learned the latest strategies and best practices in pest control, plant health, and PGRs. They walked away with actionable solutions for some of the biggest challenges growers face in their operation.

The AmericanHort Virtual Retail Tour explores innovative and industry-leading garden centers. Explore ways to diversify your business, discover the key to excelling with events and education, learn tips for getting your garden center involved in the community, and get inspiration to take back to your business. Purchase the recording today!

Impact Washington is a two-day advocacy summit where green industry business owners and leaders can take action in Washington, D.C. Providing a united front, this is an opportunity for the landscaper, plant grower, garden retailer, and entire green industry communities to personally and collectively advocate for decisions that help us continue the growth of our $348 billion industry.

Over the course of two days, participants will hear from elected leaders, their staff, and other policy experts on issues of great impact on green industry business success. Our attendees will share their experiences directly with policy makers, providing real-world context and influence on the decisions being made.

The road to better performance starts at AmericanHort’s Plug & Cutting Conference. As the event for young plant producers and growers from across the country, this conference is the place to learn the newest and best strategies, technologies, and techniques in the world of plugs and cuttings.

The Landscape Operation Tour provided that behind the scenes visit world-class operations in this industry segment. Join the tour to connect with other industry innovators and leaders like yourself to network, discuss your operations, swap ideas, and so much more.

Want To Become A Member?

We look forward to connecting with you.

Prepare for the
Future

Join over 20,000 people who receive our newsletter about events, education, and much more!

This website uses cookies to improve your experience while you navigate through the website. Out of these, the cookies that are categorized as necessary are stored on your browser as they are essential for the working of basic functionalities of the website. We also use third-party cookies that help us analyze and understand how you use this website. These cookies will be stored in your browser only with your consent. You also have the option to opt-out of these cookies. But opting out of some of these cookies may affect your browsing experience.
Necessary Always Enabled
Necessary cookies are absolutely essential for the website to function properly. These cookies ensure basic functionalities and security features of the website, anonymously.
Functional
Functional cookies help to perform certain functionalities like sharing the content of the website on social media platforms, collect feedbacks, and other third-party features.
Performance
Performance cookies are used to understand and analyze the key performance indexes of the website which helps in delivering a better user experience for the visitors.
Analytics
Analytical cookies are used to understand how visitors interact with the website. These cookies help provide information on metrics the number of visitors, bounce rate, traffic source, etc.
Advertisement
Advertisement cookies are used to provide visitors with relevant ads and marketing campaigns. These cookies track visitors across websites and collect information to provide customized ads.
Others
Other uncategorized cookies are those that are being analyzed and have not been classified into a category as yet.
SAVE & ACCEPT